4Pcs Hose Connector Set As implied by the name, garden hoses are commonly used to transport water for gardening, lawn care, and other landscaping purposes

The alternative term “hosepipe” is a chiefly British, South African, and southern US usage; “hose” or “garden hose” is the predominant term in other English-speaking areas. The term “hose” is also used for other types of flexible, water-carrying tubes such as those used by fire departments.

Garden hoses are typically made of extruded synthetic rubber or soft plastic, often reinforced with an internal web of fibers. As a result of these materials, garden hoses are flexible and their smooth exterior facilitates pulling them past trees, posts and other obstacles. Garden hoses are also generally tough enough to survive occasional scraping on rocks and being stepped on, without damage or leaking.

Each male end of a typical garden hose can mate with the female connector on another, which allows multiple garden hoses to be linked end-to-end to increase their overall length. Small rubber or plastic washers (often confusingly called “hose washers”) are used in female ends to prevent leakage, because the threads are not tapered and are not used to create a seal.

Most garden hoses are not rated for use with hot water; even leaving certain hoses in the sun while pressurized can cause them to burst.

Hoses used to carry potable water are typically made of NSF International-listed polymers tested and shown not to leach harmful materials into the drinking water, such as the plasticizers (phthalates) used in polyvinyl chloride (PVC, or vinyl) hoses. 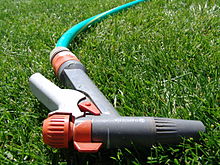 As implied by the name, garden hoses are commonly used to transport water for gardening, lawn care, and other landscaping purposes. They are also used for outdoor cleaning of items such as vehicles, equipment, building exteriors, and animals. NSF-approved hoses may be used for connecting drinkable water to recreational vehicles and trailers.

Whenever a flexible hose is connected to a drinkable water supply, the spigot or tap should be fitted with an approved backflow prevention device, to prevent contaminated water from being siphoned back, in the event of a pressure drop. Many water suppliers require this, and plumbing code may legally require permanently installed backflow preventers.Special hoses designed to leak throughout their length are sometimes used to gently distribute water on a lawn or garden. These hoses have either many small holes drilled or punched in them, or are made of a porous material, such as sintered rubber particles. These “soaker hoses”[1] are a simple, low-cost, substitute for a drip irrigation system.

These difble hoses[edit]fer from traditional hoses in that the inner membrane expands when filled with water, much like a balloon. An outer cover protects the delicate expandable membrane from punctures. Such hoses “grow” when pressurized, and shrink back down when the pressure is released, allowing for easier storage. 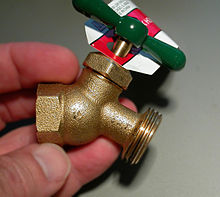 Garden hoses connect using a male/female thread connection. The technical term for this arrangement is a “hose union“. Spigots or sillcocks have male hose connectors only, and the mating end of a hose has a captive nut which fits the threads there.

In other countries, a British Standard Pipe (BSP) thread is used, which is 3⁄4 inch (19 mm) and 14 TPI (male part outside diameter is 26.441 mm or 1.04 in). The GHT and BSP standards are not compatible, and attempting to connect a GHT hose to a BSP fitting, or vice versa, will damage the threads.

Various adaptors made of metal or plastic are available to interconnect GHT, BSP, NPT, hose barb, and quick connect fittings.

In the 1980s, the use of quick-connector systems became increasingly popular. These are fittings that attach to the hose and or screw into common hose connectors and equipment, allowing hoses and accessories to be easily connected together using a snap-fit type system. The first plastic connector was invented in the UK by Hozelock in 1959[6] and the style has now become the de facto standard throughout Europe and the wider world, compatible with and imitated by many other manufacturers. Some connectors include an internal valve that is only opened by connecting the fitting, so that disconnecting a hose using this adaptor causes the water flow to stop. This greatly eases common tasks by allowing specialised sprayers to be interchanged without requiring adapters or spigot changes.

In 2014, it was reported that use of common garden hoses in combination with spray nozzles may generate aerosols containing droplets smaller than 10 μm, which can be inhaled by nearby people. Water stagnating in a hose between uses, especially when warmed by the sun, can host the growth and interaction of Legionella and free-living amoebae (FLA) as biofilms on the inner surface of the hose. Clinical cases of Legionnaires’ disease or Pontiac fever have been found to be associated with inhalation of garden hose aerosols containing Legionella bacteria. The report provided measured microbial densities resulting from controlled hose conditions in order to quantify the human health risks. The densities of Legionella spp. identified in two types of hoses were found to be similar to those reported during legionellosis outbreaks from other causes. It was proposed that the risk could be mitigated by draining hoses after use

Advanced Agriculture
5 out of 5

Advanced Agriculture
5 out of 5

Add to cart
Added to wishlistRemoved from wishlist 0
80.00৳
Seller information
Green Me